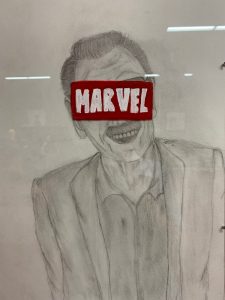 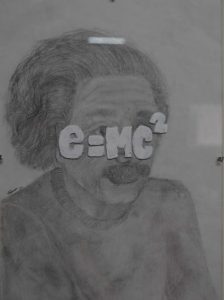 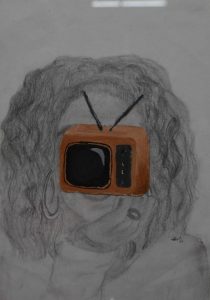 My artwork is a collection of 10 different appropriation pieces of Rene Magritte’s ‘the son of man’  to help share the story of some of our famous people who founded the way for the rest of us now in what they have achieved in. I chose to do a mix of ink to wood transfer and lead on paper and all of them have an acrylic painting helping to share what they excelled in. I did an ink transfer for the following people – Vincent van Gogh, The Wright Brothers, Marie Currie, Neil Armstrong, Charlotte Cooper and Edwin Flack and I did a sketch of Stan lee, Albert Einstein, Oprah Winfrey and Amelia Earhart.

The objects I chose to paint on top of the different people symbolise a significant moment in their life that provided them with their fame. Vincent Van Gogh has a painting of a sunflower in the style inspired by his paintings, Vincent often painted sunflowers when he was in the mental hospital as a symbol of hope, the wright brothers are the two people who invented the first flying plane so I decided to paint they exact plane, Marie Currie was one of the first female scientists to be recognised for her work and I have decided to paint the bottle of radium that she had in her lab, Neil Armstrong was the first person on the moon and so I painted the moon, Charlotte cooper was the first female to ever win a gold medal at the Olympics, Edwin Flack was the first Australian to win a gold medal in the first Olympics in Greece, back then gold was to valuable to make into medals so first place was awarded with a silver medal and an olive branch so I decided that the olive branch was a good direction to go in; Stan Lee was the creator of MARVEL and became an icon among everyone for his achievements, Albert Einstein is well known for his discovery of the formular e=mc2, Oprah Winfrey’s  show opened up in the early 1980 and so I painted the typical TV in the 1980s lastly Amelia Earhart was the first person to fly across the Atlantic ocean and I decided to paint her plane that she did that in.