Is it perfect yet? 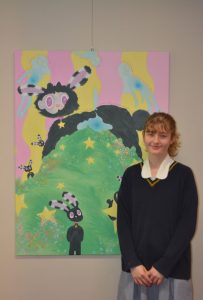 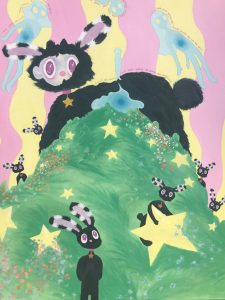 As an artist, I highly value themes such as imagination and individualism, and am inspired by artists Mark Ryden and Patricia Piccinini and the Surrealism movement. I aim to reflect these influences in my Body of Work. For my artwork, I am using acrylic paint on canvas, as this medium plays to my strengths and will allow me to illustrate my concept as effectively as possible. It will enable me to create the exact colours I want for my painting, as colour and tone is a crucial aspect to the delivery of my concept. It will also allow me to be precise with what exactly I convey. I have been developing my idea mainly through experimentation- trying different drawing and painting mediums, art styles, and concepts. I initially drew out mind maps and wrote down any and every idea I could think of, then chose my favourite ones and drew them in my VAPD. This process persisted for several months before I finally refined an idea strong enough to be used for my HSC work.

My painting explores the issue of being metaphorically trapped in a state of imagination and escapism, and the corresponding flaws this imaginary world may have to the real world. It focuses on how this affects the individual by portraying the image of a rabbit-human hybrid, of which its human face is representative of its aware, conscious mind and perception, and its rabbit body represents the imaginative state it is stuck in. This idea of it being technically imprisoned by its subconscious desire to stay in this dream world is emphasised by the black and white stripes on its ears, symbolizing imprisonment, (hence their resemblance to bars of a prison cell). It is painted to be extremely large in comparison to the rest of the features of this world, which reinforces the discomfort and sense of unbelonging that this character feels.

Also depicted in this painting is several other rabbit characters, however, they do not share the feature of having the human face, therefore they do not share the same dissatisfaction as the main subject. It can be seen that one of the rabbits is possessively holding a key, which conveys the freedom that is being withheld from the hybrid creature. This power imbalance which inhabits even a world that was initially meant to be ideal, mirrors the grim nature of many elements of reality. It aligns with historical events such as The Holocaust of World War II, in which power was abused and used for immoral purposes. By displaying themes such as imprisonment and power imbalance in a “dream world”, it’s highlighted that this state of escapism is in fact not perfect nor pleasant, but a mere reflection of the internal torment of the individual. Like the evident conflict between the conscious and subconscious mind through the main character’s appearance, we see the conflict between freedom and imprisonment all throughout the painting. Both themes collide with another as they are placed in the same space, as seen in the striped sky and the key shaped clouds depicted in this painting. The possibility of being freed from this unpleasant state seems comedically close, but the creatures possessing the power to do so are ruthless, and the conscious mind is far less powerful than the subconscious desires.

I aim to make the audience deeply question what they’re seeing, and how it may relate to themes in their life. I understand that feeling trapped or dissatisfied is a common theme among individuals, and even the longing for perfection is something I feel is rather common. I have used my personal experience with escapism and feeling stuck to relate it to real life issues that the audience can make links to. My artwork is to be aesthetically appealing and eye catching, but more than anything, intriguing. Like a puzzle, I want it to have elements that the audience feels they need to work out and interpret. Through coming to an understanding of the artwork by analysing the expressions of the characters and the implications of symbols used, I hope for the audience to develop an emotional connection to the sad hybrid creature sitting in this imaginary world, or even a new perspective of the emotional impacts of individual discontent and imaginative escape.