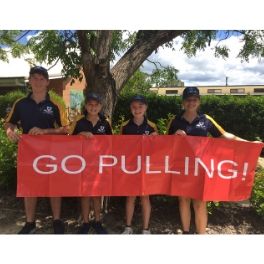 Pulling House has had a very positive start to the year by taking out the Primary and Secondary Swimming carnivals. The Pulling House Captains were particularly pleased with the effort made by the students. Primary House Captains, Seth C and Jennie M, inspired their house with enthusiastic house songs and plenty of Pulling merchandise decorating the grand stand. Seth and Jennie both said this created extra house spirit and entries that led to Pulling holding off a strong late charge from the other houses.

Primary’s win encouraged the Secondary Students during their carnival. Secondary House Captains, Will E and Aliza W led from the front and encouraged participation throughout the day. This was displayed by the amazing number of red caps that were constantly lining up on the starting blocks. They also agreed that high participation in events, along with some outstanding individual performances, helped Pulling win on the day.
We saw wonderful collaboration, encouragement team spirit and a sense of belonging in Pulling House throughout all the swimming events.  The Pulling students will now start preparing for the popular Cross Country event to be held later in Term One. This will be a great opportunity for primary and secondary to compete together and show the house spirit they have become renowned for.