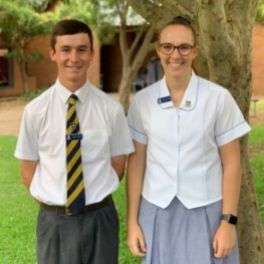 Scone Grammar School Captains, Alyssa Mollema and Tyler Kelly both have exceptional talents at archery and equestrian respectively. They are both part of our Pathways programme to complete Year 11 and 12 over three years finishing in 2022, allowing them time to dedicate to their talents as well as to their academic achievements.

They both epitomize our 2021 school motto, working hard at their exceptional talents, but they are also realistic about their academic and sporting balance, along with their leadership roles as our joint School Captains this year. Ask them about their sporting talents and it becomes immediately obvious that humility is one of their top character strengths. Then again, humility was the focus of our SGS motto last year.

Alyssa has excelled in Archery both individually and in mixed and women’s teams, and Tyler in Equestrian – both Show Riding and Eventing. Both have competed in Australian titles and spent time overseas. The recent Tokyo 2020 Olympics has inspired them both, although Alyssa’s dream is that compound archery will be included in the Olympics, along with the existing recurve archery event. According to Tyler, “Andrew Hoy has been a big inspiration for me and the way that he has been able to adapt to the way the equestrian sport has evolved, representing Australia across 8 Olympic games “.

Their dedication to their chosen sports requires considerable time and effort in training and whilst COVID-19 restrictions has limited their travel for competition, they would typically spend a lot of time travelling and competing, cutting into their school hours.

Scone Grammar School supports an accumulated HSC Pathways programme recognised by the NSW Government Education Standards Authority for students competing or performing at elite levels of sport or culture. The SGS pathways program stretches the Year 11 and 12 Stage 6 subjects for Higher School Certificate (HSC) over three years instead of two, allowing more time for students competing at elite levels to balance their time between study and their chosen sport and more free study periods.

SGS Principal, Mr Paul Smart, explains, “Identifying and working hard at talent is an important part of our overall approach to building positive, flourishing learners. When students find an activity they love and have a talent for, it motivates them to work hard across more areas than just that specific talent. It is also surprising to see how easily learning dispositions from that talent translate to academic learning. A Pathways program like this enables students such as Alyssa and Tyler to develop their talent, as well focus on their academic achievements.”

Both Alyssa and Tyler are completing Year 12 English and Maths for their HSC this year, along with three other Year 11 elective subjects. Next year they’ll complete the remaining three or four elective subjects for their HSC. Alyssa will be studying PDHPE, Biology, CAFS (Children and Family Studies) and Business Studies. Tyler will also study Business Studies next year, as well as Agriculture and Industrial Metal. They will study these subjects next year with fellow Year 11 students from this year.

Alyssa is interested in a career as a paramedic, so her goal, at this stage is to study paramedicine alongside her archery competing. Tyler is keen on a career in the thoroughbred industry and would like to one day ride for Australia in Eventing. Both understand the importance of academia, alongside their sporting focus and success.

Alyssa explains her view of the SGS Pathways Programme. “I’m so thankful that Scone Grammar School has allowed me to do Pathways. Even though I haven’t been able to compete at the 2021 World Archery Youth Worlds due to COVID-19, it has given me more time to keep up my training and deal with the emotions I’ve experienced due to losing the opportunity to compete this year. It has also allowed me to put more time into being the best possible school captain that I can be.

A challenge of doing pathways will be seeing my friends complete school and move away to start their new chapter in life. However, another good thing about Scone Grammar School is that we’re a small enough school that I have friends in the year below me which will help with my transition into the new year group.”
According to Tyler, “A role in the thoroughbred industry is a driving factor for me to pursue my academic goals as well. It’s great to be able to have the balance of this as well as working at my equestrian goals.” 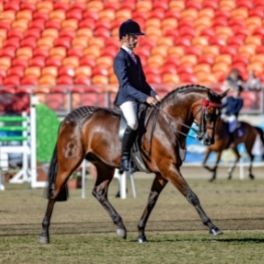 Tyler is a talented Equestrian rider – competing in both Show Riding and Eventing. He has been Royal Champion at many Royal Shows throughout Australia – Adelaide, Melbourne, Canberra, Sydney and Brisbane. In 2019 he won the Grand Champion Owner Rider at the Southern Cross Show Horse Spectacular. From there, sponsored by Equestrian NSW, he spent a month in the UK gaining experience in Show Riding from a UK perspective, world class Eventing and Show Jumping and spent time in the thoroughbred industry. Just a couple of years earlier he took out the 2017 Grand Champion at the Grand National Championships. 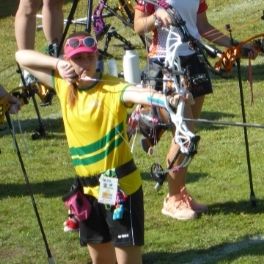 Alyssa has excelled in archery. In the 2020 Australian Open she won the Compound Open Women’s class and the Open Women’s Teams class. The year before, she won three classes in the 2019 Youth Nationals and came second in another. She represented Australia in compound archery in the 2019 World Archery Youth Worlds competition in Spain where she placed ninth in the Compound Cadet Women class, third in the Mixed Team and eleventh in the Women’s Team.

We asked Alyssa about someone she may aspire to be like. “I look up to an elite archer whose name is Paige Pearce. She is from America and I have been lucky enough to meet her. The way that she presented herself was as though she was the same as every other archer and not better than anyone else. This is the way I hope to be when I become as good as her.”, says Alyssa.